Bajrang Dal members led a bike rally to Vidurashwatha, known as the “Jallianwala Bagh of South India”, on the occasion of V.D. Savarkar’s birthday recently.

This is the place where local people agitating for the country’s freedom were shot dead in 1938 by the British. At the centre of the small town stands a gallery on the freedom struggle, called Veera Soudha.

Though Suryanarayana Rao, national co-convener of the Bajrang Dal, insisted that the rally had nothing to do with the recent campaign by right-wing groups demanding “correction” of some installations, he said the freedom struggle gallery at the monument was “misleading.”

“Our ideological fight to correct it will continue,” he said.

“At least four groups of Hindutva activists visited the gallery in a month’s time and took objection to various exhibits, especially those depicting Hindutva communalism and its role in Mahatma Gandhi’s murder. They have threatened to ransack the gallery if these exhibits are not removed,” said B. Gangadhara Murthy, curator of the gallery.

Ramakrishna, caretaker of the gallery, expressed relief that the Bajrang Dal rally had passed off peacefully amidst tight police security.

Hindutva groups have taken objection to seven of the 105 exhibits: two depicting Tipu Sultan’s fight against the British, one about a Hyderabadi Muslim boy Khair Mohammed facing sedition trial, two on Hindutva communalism and Gandhiji’s assassination, and two more on the Adivasi struggle.

“They claim that the gallery is too Mahatma Gandhi and Congress-centric and allege it glorifies Muslims. They want uncritical exhibits on V.D. Savarkar,” Prof. Murthy said. Exhibits at the Veera Soudha gallery that have become controversial as Hindutva groups have taken objection to them.

These objections come in the wake of a raging controversy over Karnataka textbook revision where a speech by RSS founder K.B. Hedgewar has been introduced, which the ruling BJP government defended saying he was a freedom fighter too. Lessons penned by several writers from Kannada’s progressive secular stream of literature have been replaced by those authored by conservative, right-wing authors.

B.N. Shivakumar, president, Vishwa Hindu Parishad, Gauribidanur unit, claimed that people of the town too had taken exception to some exhibits, adding that they had not threatened the gallery caretakers but only tried to “convince” them.

Veera Soudha, a tourist destination in the taluk, has now turned into a fortress with police protection for the gallery. Prof. Murthy has also been provided security. Amidst threats, the administration has banned photography within the gallery and is now wary of those who come in. 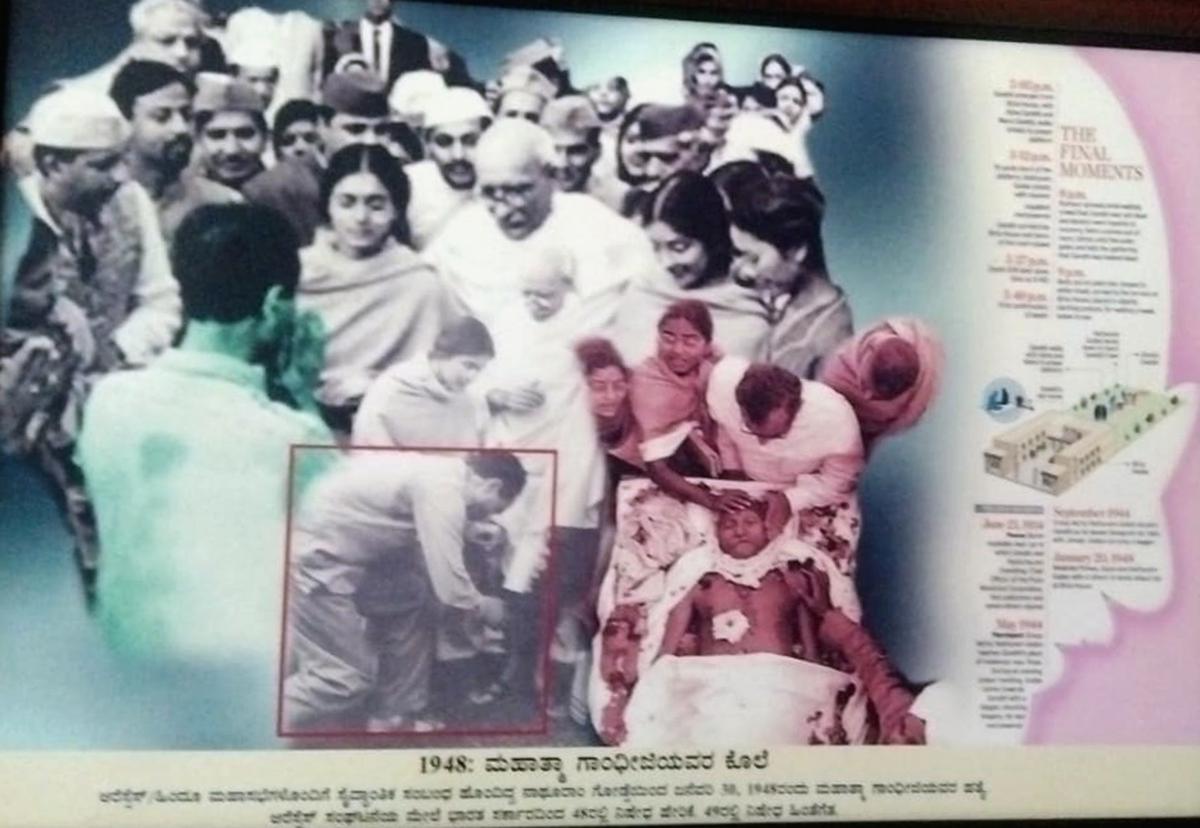 Exhibits at the Veera Soudha gallery that have become controversial as Hindutva groups have taken objection to them.

S. Aravind, a visitor, sad it was sad to see the gallery on the struggle for Indian independence becoming “a battlefield of ideological contest.” “The fact that police have to guard this gallery today seems like a metaphor for our shared heritage being under threat of polarisation,” he said.

Prof. Murthy, whose private initiative in a private trust led to the creation of the gallery in 2009, said he had relied on the 1985 NCERT publication “India’s Struggle for Independence: Visuals and Documents” and he was baffled at how recorded history was being disputed. He said he was ready for a debate, but with documents.

Linguist and activist G.N. Devy, who visited Veera Soudha in the wake of the controversy, told The Hindu that it was telling that after over a decade and thousands visiting every year, these objections have to crop up now ahead of the Assembly polls.

The taluk is seeing other instances of Hindutva mobilisation too. For instance, in Gauribidanur town, 8 km from Vidurashwatha, Dalit organisations wanted to install a statue of Dr. B. R. Ambedkar at the town’s Ambedkar Circle.

As soon as an application was made, statues of Ram, Lakshman, and Sita were installed in March, 2022, claiming it was once a site of a Ram Mandir. The land is now disputed and guarded by the police. This year the town saw an unprecedented mobilisation on Ramnavami around the issue.

“The land was allotted to the Kodandarama Bhajana Mandali in 1965, but was cancelled by the Deputy Commissioner in 2014 as the committee had built shops. But when we sought to install an Ambedkar statue, an idol of Ram appeared,” said C.G. Gangappa, a Dalit leader.

Decision regarding conduct of Teppotsavam in Vijayawada will be made on Wednesday: Minister – Mrit News

Decision regarding conduct of Teppotsavam in Vijayawada will be made on Wednesday: Minister – Mrit News