The last glimmer of hope is almost extinguished from their eyes. It is only a matter of time before the former employees of Cement Corporation of India’s once-flourishing Adilabad unit are evicted, along with their families, from their dilapidated quarters, over two decades after production at the factory came to a grinding halt. The Centre has issued an e-bid for valuation of assets required for disposal of the plant, and dismantling the quarters. Despondent ex-employees blame their misfortune on the 1991 New Economic Policy while locals rue a lost opportunity for putting Adilabad on the path of development

The last glimmer of hope is almost extinguished from their eyes. It is only a matter of time before the former employees of Cement Corporation of India’s once-flourishing Adilabad unit are evicted, along with their families, from their dilapidated quarters, over two decades after production at the factory came to a grinding halt. The Centre has issued an e-bid for valuation of assets required for disposal of the plant, and dismantling the quarters. Despondent ex-employees blame their misfortune on the 1991 New Economic Policy while locals rue a lost opportunity for putting Adilabad on the path of development

Brooding over the once-prosperous days of the famed Cement Corporation of India (CCI)’s Adilabad unit, a group of silver-haired ex-employees sitting on the rickety wooden benches at a kirana shop in the township look dispirited. For, the Government of India has called online bids for valuation of assets required for disposal of plant, machinery along with plant’s structure, store and scrap and dismantling quarters of the township.

For them, the township was their universe. Even though production was suspended in October 1998, around 25 families of the former employees who occupied the factory-owned quarters continued to stay there. The quarters have been in a dilapidated state, due to lack of upkeep. Now with the valuation move, they are a worried lot as they see a definite eviction on cards.

During a series of interactions with The Hindu, they shared happy memories when the factory was functioning in full swing, but those are now tinged with a sense of misery and desolation. They blame the New Economic Policy adopted by the government in 1991 for wrecking their future.

CCI employees union vice-president R.K. Ghosh (64), sitting on a wobbly chair outside his Quarter No. A-13, recalls how the township was flourishing when he joined the corporation in 1982, a year before production commenced, and later, how it was shuttered at a time when demand for cement was on the upswing.

Cement being the most sought after commodity, Mr. Ghosh, a native of Kagaznagar (now in Komaram Bheem-Asifabad district), says the Adilabad plant was at a strategic point supplying cement to the Vidharba and Marathwada regions of neighbouring Maharashtra, apart from catering to the north Telangana market.

He wonders how such a profitable unit, which produced 1,200 metric tonnes per day, was wound up despite the fact that it has captive limestone deposits which lasts at least 120 years. Though the factory stopped production in 1998, it was effectively closed in 2008. A group of former employees of CCI at a kirana shop in the CCI Township, Adilabad.
| Photo Credit: Abhinay Deshpande

Mr. Ghosh and a couple of other residents say that they have nowhere else to go and have nothing better for a roof than their dilapidated quarters, despite constant threat to life posed by wild animals inhabiting the desolate environs of the ‘sick’ CCI township to the north of Adilabad town.

Never in their wildest dreams had they imagined that ‘their’ factory would stop production, and they would be jobless, the former employees share. “Our kids were born here. They went to Kendriya Vidyalaya on the premises. When we were slowly settling down in our lives and starting to think of the future, the management suddenly dropped the bombshell. Once it stopped, it never started again,” Mr. Ghosh rues.

Stating that the latest e-bidding process was ‘wrong’, employees union general secretary S. Vilas demanded that the government cancel it and first clear the pending dues, including retirement benefits, of former employees.

Blaming former Prime Minister P.V. Narasimha Rao’s New Economic Policy for the downfall of the factory, Mr. Vilas says that in the early 1990s, the management stopped working capital and by 1994, there was a drastic fall in production. “Then it reached break-even point, and a few years later, production stopped. It was a profit-making unit, and several representations were submitted to both the State and Central governments to revive it, but in vain,” he adds. 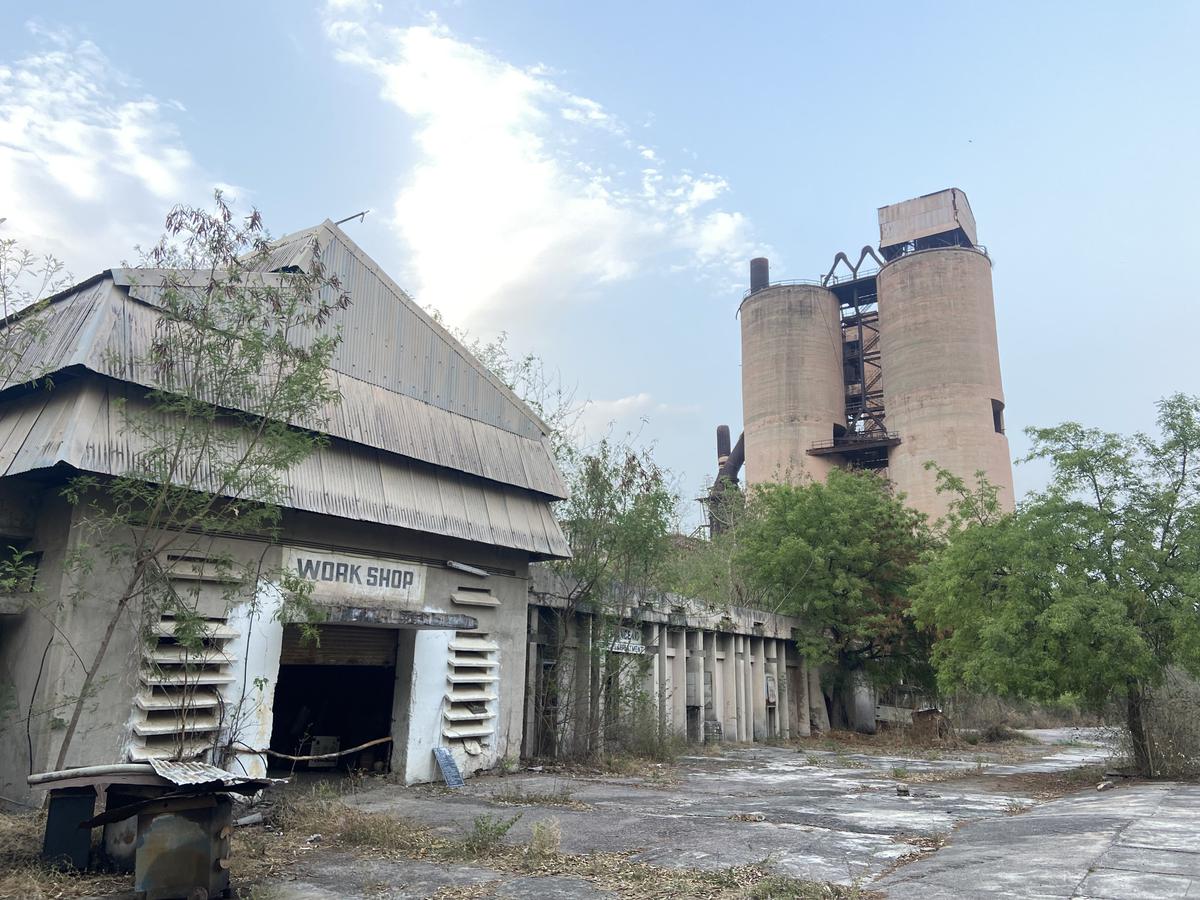 With a vast and dense forest cover, the district has also minerals that support the production of cement and other products. The cement factory was the only large public sector unit and had huge employment generation potentiality. With the closure of the plant, the youth of the district lost an opportunity to find gainful employment and had to migrate to the State capital even for a menial job. Had the CCI plant continued to function, Adilabad’s fortunes might have been in a different sphere, beckoning the youth of the district to pursue quality education and find employment there itself, opine locals. It is deplorable to note that even now, Adilabad town, which was also the headquarters for the erstwhile district, does not have a post-graduate college or engineering college.

The former employees of CCI, who have been clinging on to their quarters even after almost 25 years of non-activity at the factory, say they were hanging around because they had to receive gratuity and other employment benefits from the corporation. “Once they clear our retirement benefits, we are ready to leave the premises. The matter is sub judice now,” former employee K. Laxmaiah (65), a native of Jayashankar-Bhupalpally, says.

But the corporation maintains the former employees are illegal occupants and that steps are being taken to evacuate them. But this is being resisted by families as, they reiterate, unless their termination benefits are cleared, they will not vacate the quarters.

To make matters worse, CCI officials had recently stopped supply of water to the quarters besides snapping electricity supply to streetlights. With this, the township looks like a ghost town as darkness falls, says another former employee K. Swamy (63), who hails from Karimnagar district.

The CCI Adilabad unit was among the seven out of 10 factories run by the corporation listed for closure in 2007, a decade after production of cement was suspended at the factory. The employees union had, however, filed a writ petition challenging the closure in 2008 in the erstwhile AP High Court, which granted the employees a stay. It had 350 regular employees, 1,000 workers on contract, 250 in the packing plant and over 2,000 indirectly employed ones, who fell on bad times due to the suspension of production. There were instances when female members of some workers’ families had to resort to sex work to make ends meet.

A sneak peek of the plant shows it is a fossilised world dotted with rusted tractors, lorries, buses, machinery, and godowns that were gutted and grounded. Some wild animals have been sighted beside a mine of slithering wasps that hiss and scare one out of their wits. While the gates of the township are not guarded, there are 18 home guards who work in three shifts and are mostly deployed inside the plant, while two or three personnel guard the general manager’s bungalow. At least four home guards were manning the plant from inside by locking the main entrance gate to the unit.

The iconic towers of the factory can be seen from any corner of the town. “The two pinkish towers were once the symbol of pride for Adilabad,” Rajeshwar Rao, a private company employee, recalls.

A rough road from the entrance on Landasanghvi Road leads to the township. A few meters from there is the plant. Entry for outsiders, including former employees, is prohibited. However, from the large iron gates, one can notice a security room and Central Excise Office, where an iron board commemorating the ‘Golden Jubilee’ lies on the ground. A few metres in the direction of the tower, one can sight a power house and a workshop on the left, and a huge, dilapidated warehouse on the right. The campus is a lush, verdant haven. 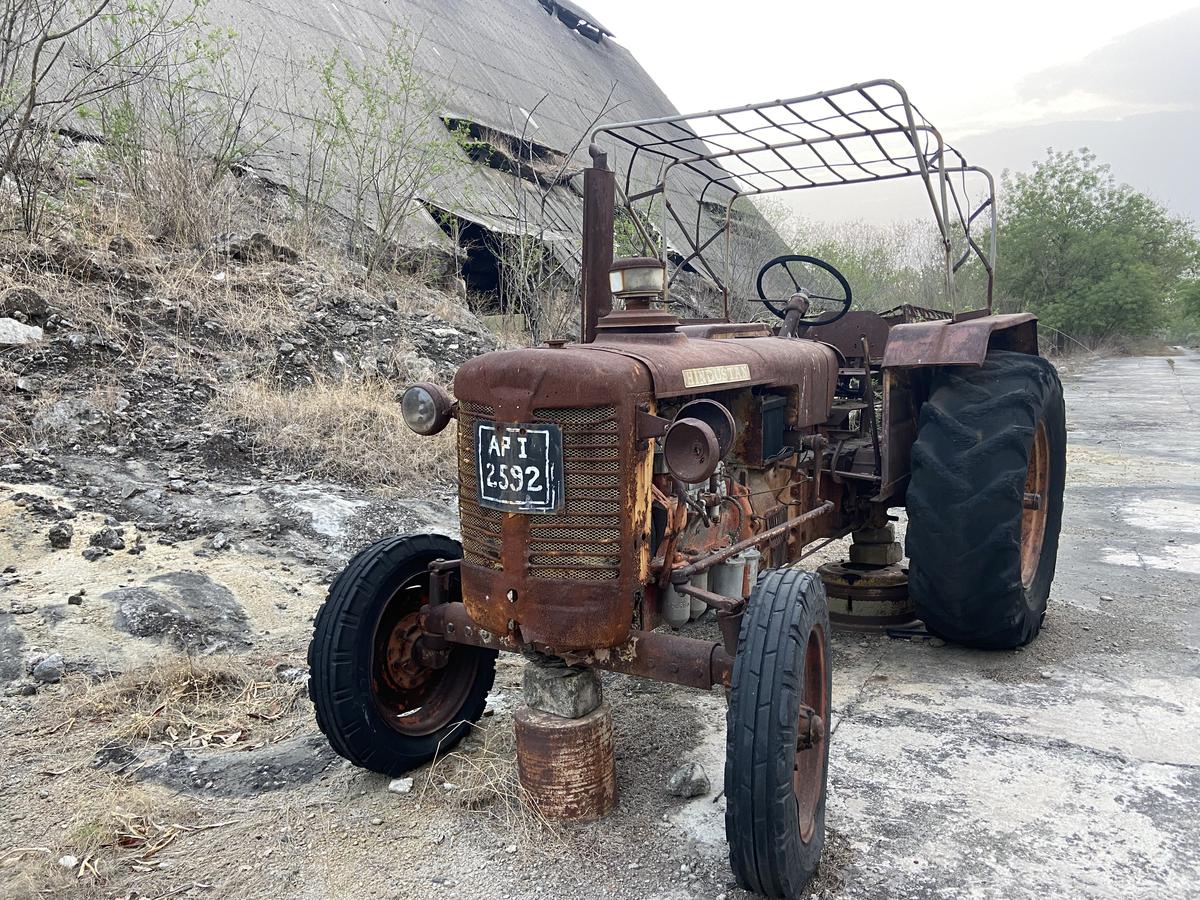 The premises are dotted with rusted tractors, lorries, buses, machinery, and godowns that were gutted and grounded.
| Photo Credit: Abhinay Deshpande

In the late 1970s and early 1980s, the factory was the beacon of hope for the backward district of Adilabad, then a non-descript and poverty-ridden town. However, once operations of CCI commenced, it became a beehive of activity. Every Saturday, a bus from the CCI township packed with family members of employees used to arrive in town. It was estimated that they did a minimum purchase of ₹15 lakh in a single day, while the weekly turnover was around ₹1 crore, mainly due to CCI employees!

Close on the heels of the CCI unit closure, the Adilabad Cotton Growers Cooperative Spinning Mill Limited in the town declared a lockout, throwing the lives of its nearly 700 workers and employees in disarray. However, a few years later, a local businessman took over the mill, renamed it as ‘Astalakshmi Spinning Mill’, and resumed operations, giving employment to thousands directly and indirectly.

Two other factories which closed down during the last two decades in Adilabad district were the Annapurna and Someshwara cement plants. It ruined the livelihoods of a few hundred workers. Now, the town currently has more than 25 ginning mills.

The caretaker of the township says the residents hardly worked for 15 years but were in possession of the quarters for more than 25 years “without any valid reason”. They should have vacated but continue to cling on to quarters which is “illegal”, he adds.

Telangana Industries Minister K.T. Rama Rao appealed to the Central government multiple times to review and take a positive decision to revive CCI-Adilabad. He offered all support from the State government as well as fiscal incentives to put it back on the rails and ensure thousands of youth from Adilabad are gainfully employed.

Adilabad MLA Jogu Ramanna demands that the Centre hand it over to the State government so that it could efficiently run the factory and provide employment opportunities to local youth. “If we start the unit, the BJP is worried that we might get credit for it. They are seeing it as a political opportunity, whereas our goal is to provide employment and develop the district,” he says.He avers that the State is willing to start the unit from scratch and make it profitable within no time. “We seek clarity. Now, We have asked Rajya Sabha MP K. Keshava Rao to take up the issue with Industrial Standing Committee, of which he is the chairman,” he says.

BJP leaders rubbish the claims of TRS-led government and say that it is no secret that the factory is a dead horse which the latter is flogging. “Clearly, it is political drama. They have done nothing for the welfare of the district, and to divert the attention of locals, they are sitting on this issue for months. Even they know it is impossible to restart the factory,” BJP leader Chityala Suhasini Reddy says.