The meeting comes in the wake of terrorists carrying out targeted killings.

The meeting comes in the wake of terrorists carrying out targeted killings.

Ahead of a crucial meeting on Jammu and Kashmir, National Security Advisor Ajit Doval on Thursday met Union Home Minister Amit Shah and is believed to have discussed the security situation in the Union Territory which has witnessed a spate of targeted killings since May 12.

Mr. Doval along with RAW chief Samnat Goel closeted with Mr. Shah for over an hour at the home minister’s office at North Block this afternoon, official sources said.

Details of their meeting were not known immediately but they were believed to have discussed the situation in restive Kashmir where a bank employee hailing from Rajasthan was killed this morning — the third non-Muslim government employee.

Mr. Shah will chair the high-level meeting on Friday to discuss the security situation in Jammu and Kashmir, the second such exercise in less than a fortnight which comes at a time when terrorists have been carrying out targeted killings in the valley.

Mr. Doval is also expected to attend Friday’s meeting which will be chaired by the home minister. 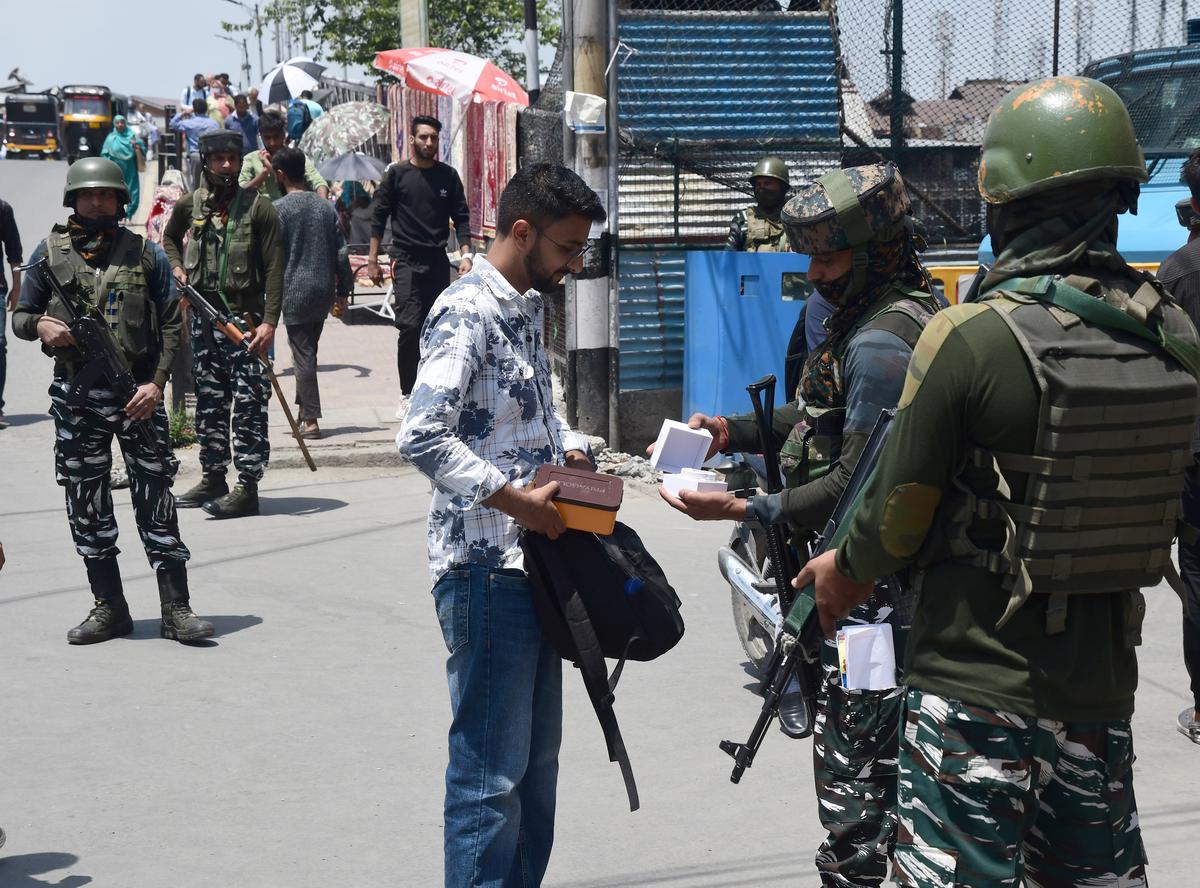 Security personnels during a random search operation at a market area in Srinagar on June 2, 2022.
| Photo Credit: NISSAR AHMAD

Jammu and Kashmir Lt Governor Manoj Sinha and senior functionaries of the central government and union territory would participate in the meeting which is also expected to take stock of the arrangements for the annual Amarnath yatra, being held after a two-year hiatus due to the COVID-19 pandemic.

The meeting will be held amid protests by Kashmiri Pandit community seeking protection and some of them leaving the valley following the targeted killings.

In the last meeting on June 17, the home minister had advocated pro-active and coordinated counter-terror operations and had asked security forces to ensure zero cross-border infiltration and wipe out terrorism from the union territory.

The meeting comes in the wake of terrorists carrying out targeted killings, including of a woman teacher hailing from Samba district of Jammu region at Kulgam on Tuesday.

On May 18, terrorists had entered into a wine shop at Baramulla in North Kashmir and threw a grenade, killing one person hailing from Jammu region and injuring three others.

On May 24, policeman Saifullah Qadri was shot dead outside his residence in Srinagar while a television artiste Amreen Bhat was gunned down in Budgam two days later.

Scores of Kashmiri Pandits, who were employed under a prime minister’s package in 2012, have been staging continuous protests threatening mass exodus since the killing of Rahul Bhat, who was shot dead by terrorists on May 12 in Chadoora area of Budgam district in central Kashmir. 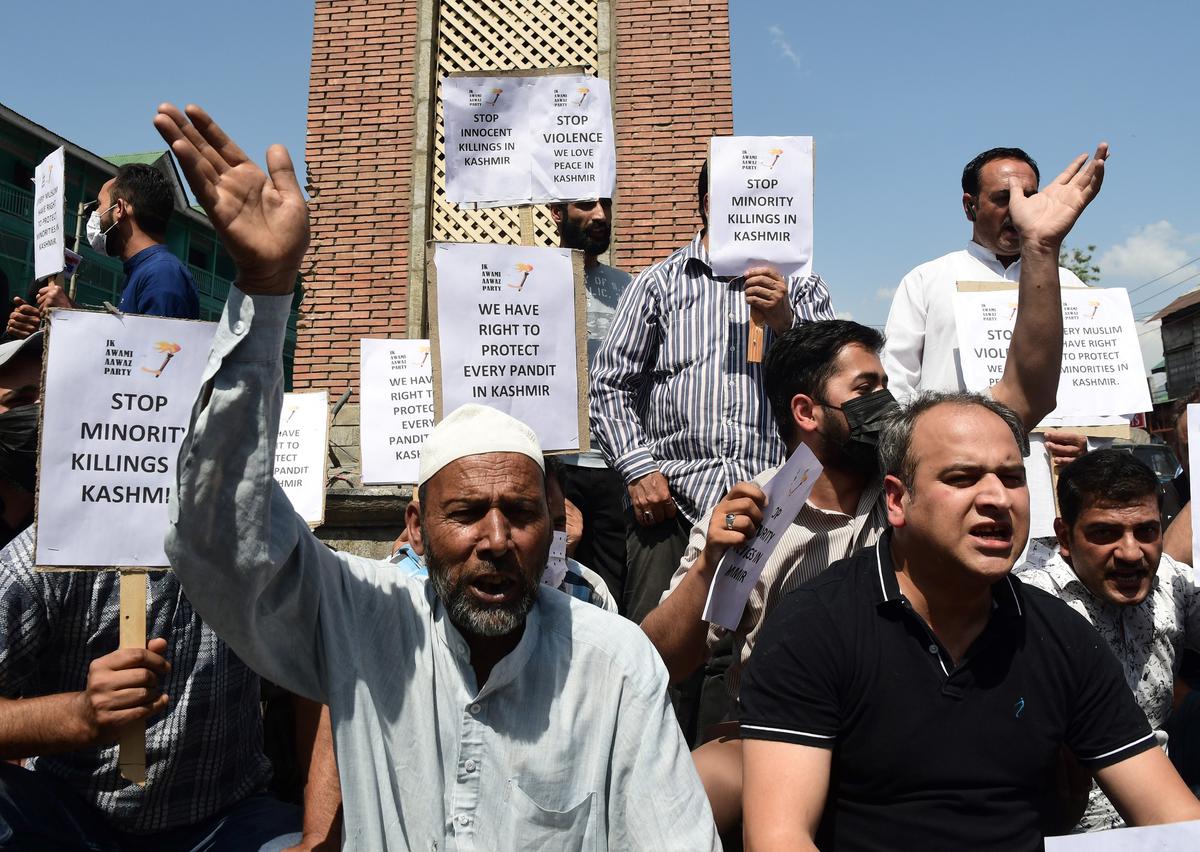 After the previous meeting, an official statement had said that the home minister directed security forces and the police to conduct coordinated counter-terrorism operations pro-actively.

The home minister had said that in order to fulfil Prime Minister Narendra Modi’s vision of a prosperous and peaceful Jammu and Kashmir, security forces should ensure zero cross-border infiltration.

Taking stock of the Amarnath Yatra preparedness, Mr. Shah had said a “hassle-free” journey for the pilgrims is a priority of the Modi government and directed all arrangements, including additional electricity, water, and telecom facilities be made.

He had also stressed for enhancement of mobile connectivity along the yatra route as he directed that earth moving equipment should be placed at vantage points to clear the route in case of landslides.

The home minister had asked for an adequate number of oxygen cylinders, medical beds at an altitude of more than 6,000 feet and deployment of ambulances and helicopters to deal with any emergency medical situation.

During the previous meeting, it was also decided to enable WiFi hotspots to ensure connectivity throughout the 39 km of the yatra route from Pahalgam in south Kashmir.

The other route is through Baltal in central Kashmir where a pilgrim treks for nearly 15 km. The yatra could not take place in 2020 and 2021 due to the coronavirus pandemic and was cut short in 2019 just before the abrogation of Article 370. About three lakh pilgrims are likely to take part in the pilgrimage that is expected to end on August 11.

About 12,000 paramilitary personnel (120 companies) in addition to Jammu and Kashmir Police are expected to be deployed along the two pilgrimage routes, one from Pahalgam and the other via Baltal, officials said. Drone cameras will help the security forces to ensure the protection of the pilgrims.

Had no role in AMMA action against Bineesh, says Ganesh – Mrit News