Ahead of World Environment Day on June 5, a look at how Karnataka has witnessed an increase in severe weather patterns in both frequency and intensity in the last decades

Ahead of World Environment Day on June 5, a look at how Karnataka has witnessed an increase in severe weather patterns in both frequency and intensity in the last decades

Last month, even as parts of north India were reeling under heat wave, many places in Karnataka, including Bengaluru, were suffered large-scale destruction caused by heavy pre-monsoon showers. In fact, the quantum of rainfall recorded in the State from March 1 to May 31 was 105% above normal.

Climate change is here to stay, and the imprints of changes in climatic conditions, says the Karnataka State Disaster Management Authority (KSDMA), are in the form of high-impact weather events. The State has witnessed an increase in such events in both frequency and intensity in the last decades, as also hydro-meteorological disasters such as drought, flood, hailstorm, cyclone and heatwave.

“During the past few years, the entire State witnessed extreme events in the Western Ghats and parts of the interior district. A significant increase in the rainfall is observed in Kolar for the pre-monsoon season, and a decreasing trend is observed in northeast monsoon for the north interior Karnataka (NIK) region. The main reason for these extreme events can be attributed to the active phase of monsoon season coupled with La Nina and positive / Neutral Indian Ocean Dipole (IDL) conditions over the State,” explained Manoj Rajan, Commissioner, KSDMA.

At the same time, there is a reduction in the amount of annual rainfall and a marginal increase in the number of rainy days in NIK and coastal regions, he said. The KSDMA Commissioner also said there has been a continuous change in temperature and relative humidity (RH) data from 2002 to 2018. 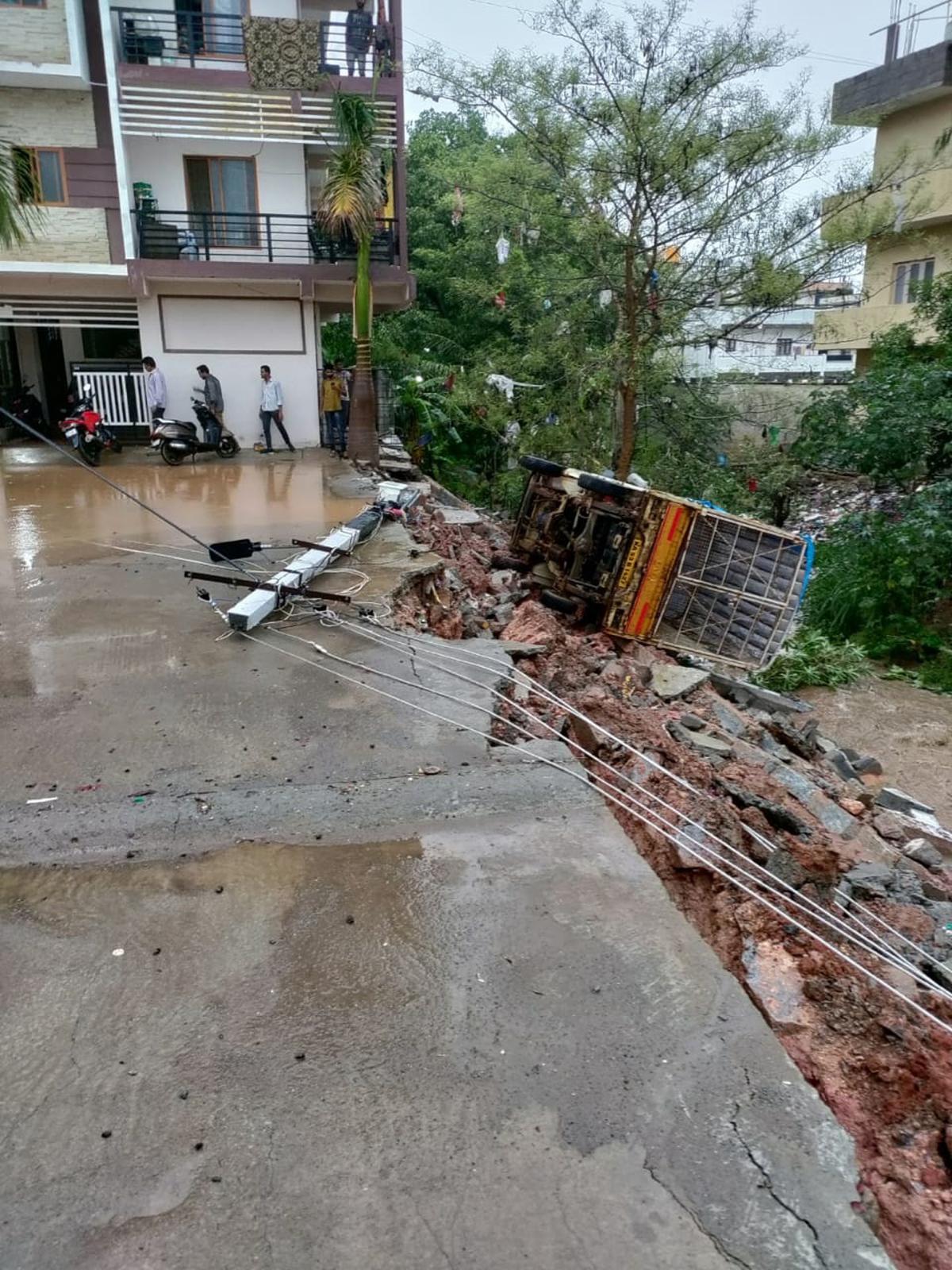 “The average temperature has shown an increasing trend, whereas the RH had a decreasing trend in most regions,” he said. Thunderstorms and lighting events have occurred more frequently in recent years, while the variability of south-west monsoon rainfall has increased significantly since 1960. Several districts are seeing an increase in prolonged dry periods with low or no rainfall or intermittent with short, intense spells of rainfall.

“The analysis of the temperature and relative humidity data series for 2002 to 2020 shows an increasing trend in average temperature, while the relative humidity showed a decreasing trend. The State has experienced drought for 15 years in the last two decades. Karnataka also experienced severe floods, and the last four years have been consecutive flood years for the State. The recurrence of droughts and changing rainfall patterns are detrimental to the surface and groundwater recharge and pose a significant challenge to water security,” said Mr. Rajan.

Bharath Setturu, Post-Doctoral Fellow, EWRG, CES, IISc, said their study of changes in land surface temperature across agro-climatic zones of Karnataka from 2006 to 2019 using spatial data highlights increase in temperature across the agroclimatic regions of Karnataka due to large-scale deforestation, urbanisation and loss of wetlands. The districts of hot dry semi-arid and hot moist semi-arid regions, such as Bidar, Yadgir, Kalaburagi, Vijayapura, Raichur and Ballari depict an increase in temperature mostly deprived of forest cover, he added. “Overall, the State has experienced a 0.5 to 1 degree Celsius increase in its average temperature, but in some regions, it shows 2-3 degrees Celsius. Statistical analysis between the rate of change in forest cover and change in temperature indicates a high degree of the strong correlation. We have also noticed a reduction in the number of rainy days in the Western Ghats of Karnataka (2 to 3 days), but increased rainfall intensity. Due to climate change and landscape degradation, and urbanisation, the soils across the State are unable to hold the high-intensity rains, which results in floods and landslides. Earlier, the rainfall was distributed over a long period, and intensity was less, but due to climate change, unseasonal rains are becoming common with high intensity,” he explained.

Regions of North Karnataka are experiencing higher losses due to greater intensity rains, and soils are unable to recharge due to scanty vegetation cover and higher degradation. The long-term rainfall analysis shows increasing trends close to 50-100 mm increase in rainfall with a reduced number of rainy days (2 to 4), he said further, adding that climate change is certain.

An example of the noticeable shift in the weather pattern is that the annual average rainfall of Karnataka has increased by 10% during 1990–2019, when rainfall during the kharif season (June–September) and rabi season (October–December) increased by about 30% and 60%, respectively, added Indu K. Murthy, Sector Head and Vidya S, Senior Analyst, both working in the Climate, Environment and Sustainabilty sector at CSTEP.

“North Karnataka districts such as Vijayapura, Raichur, Kalaburagi, Yadgir, and Uttara Kannada experienced flooding in 2019 because of an increase in extreme rainfall events. Vijayapura received five times the normal rainfall of 436 mm, Raichur received 25% higher rainfall, and Kodagu received about 55% higher rainfall in 2019. While flooding is due to poor water management and bad drainage systems, the increase in rainfall is largely due to climate change.

According to the Intergovernmental Panel on Climate Change’s (IPCC’s) latest report on impacts, vulnerability, and adaptation, human-induced climate change, including more frequent and intense extreme events, has caused widespread adverse impacts and related losses and damages to nature and people, beyond natural climate variability,” they added.

Where does this leave existing interventions? Dr. Rajan said all stakeholders have to plan and implement mitigation measures to achieve long-term climate resilience and achieve the Sustainable Development Goals (SDG).

“Since the Indian economy is intrinsically linked to the annual monsoon cycle, a better understanding of the future behaviour of the monsoon and its variability is warranted for disaster mitigation and for developing adaptation strategies to cope with climate variability and climate change. With some confidence and accuracy, a quantitative assessment of the magnitude of climate change over the Indian subcontinent is also crucial to evaluate the social and economic consequences expected and formulate appropriate, though flexible, policy options,” he said, adding that the government is taking several steps to mitigate the impact of climate change on agriculture and livelihood by providing scientific information, customised weather forecasts and weather information and natural hazard information to the public and farmers to monitor and manage their daily crops and activities.

Dr. Setturu stressed on the need to support large-scale afforestation of native species in degraded landscapes by involving local stakeholder. incentives for farmers for agroforestry, and distribution of high fruit yielding tree saplings to farmers on subsidy/ minimal pricing.

“Native species such as Melia dubia (Hebbevu) (which has commercial timber value) or Pongamia need to be planted in the degraded/ fallow agricultural lands, which requires minimum maintenance but fetches greater profits for the community. Alternative renewable energy needs to be prompted to reduce the emission from fossil fuels. The union government should focus on carbon credits to reduce the ill effects of climate change,” added.