Continuing their protest, the Pulicat fishermen blocked entry to the Adani Port and L&T Ship Building Yard from the seaside preventing a container carrier from exiting the port.

Shops in Pulicat’s bazaar area downed shutters on Thursday as traders lent support to the fishermen protesting against low wages paid to them at the private port and ship building yard in Kattupalli in Tiruvallur district. Women and children too joined in the protest and sat the entire day under hot sun. 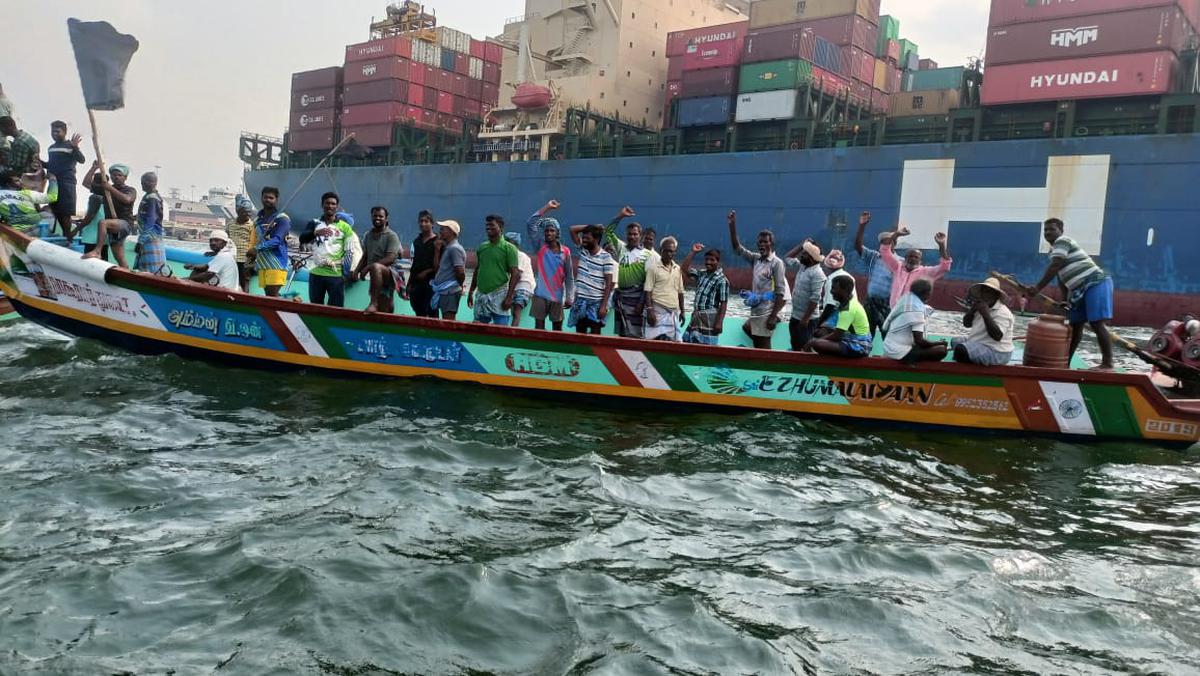 “We have been waiting for a long time, making requests and staging protests time and again. But to no avail. Our wages remain paltry and nobody who has a say in the company concerned comes for talks. The district administration too has made several attempts. Since we are not in Chennai city, nobody listens to our voices,” said Karunakaran, a local.

Durai Mahendran of the Tiruvallur District Traditional United Fishermen Association said that over the years, successive officials and even chief ministers had given them word that they would be duly compensated for the loss of livelihood. “However, only one company provided jobs. The others did not. We were promised that 1,750 persons would get jobs. Our coastline has eroded. Fishing resources have vanished with so many ships entering our waters,” he said.

K. Bharathi of the South Indian Fishermen Welfare Association said that the lives of fishermen were intertwined with protests since 1975 when the rocket launch station at Sriharikota was inaugurated. Three villages were shifted to make way for the facility and even after that, fishermen were not allowed to fish for about two weeks every time a rocket took off. “It took several protests to stop that and now they wait for a couple of hours during the launch,” he said. He said the protests demanding jobs continued with the setting up of the thermal power stations and starting of other ports.

Later in the evening, officials of the district administration interacted with fishermen and requested them to stop their protests since a meeting had been convened with the companies concerned next week. “We are for early redress of their grievances,” said an official.