Groundwater irrigation, a game-changer for agriculture in T.N. – Mrit News


With the current DMK regime fulfilling an ambitious target of providing one lakh farm electricity connections in a year, the focus has turned to the role of groundwater irrigation in Tamil Nadu.

Given the natural conditions of the State, with the Cauvery being the only big river to take care of its irrigation requirements, it is no wonder that groundwater irrigation occupies a prime position. But only since the 1990s has the extent of net area irrigated by the wells seen a substantial rise. Throughout the 1980s, it remained stagnant at about 10 lakh hectares. But between 1990 and 2000, it rose by about 4.5 lakh hectares, with its share exceeding the 50% mark. Today, groundwater caters to about 62% of the net irrigated area.

A number of factors contributed to the development. The phase of the development of groundwater irrigation was marked by a steady decline of tanks as a source of irrigation. Urbanisation, conversion of cultivable lands into plots for real estate, and encroachments have all led to waterbodies losing their position as a provider of water for agriculture.

The free power supply scheme, introduced in 1984 during the AIADMK regime, initially for small and marginal farmers, and subsequently expanded by the DMK government six years later to cover big farmers, was a game-changer. Today, the State has nearly 23 lakh agricultural connections, all enjoying free power supply. Invariably, all the wells, including open wells, are being utilised through electricity.

“This year, the government has decided to give 50,000 farm connections out of a waiting list of nearly 2.9 lakh,” says an official of the Tamil Nadu Generation and Distribution Corporation (Tangedco). On an average, agricultural connections consume approximately 14% of electricity. During 2020-21, they used 13,956 million units (MU) out of 93,344 MU, which was the figure of the total sale of power, according to a publication brought out jointly by the power utility and the Tamil Nadu Transmission Corporation (Tantransco).

“Let us not overlook the fact that Tamil Nadu has achieved substantial progress in agricultural production and productivity, thanks to groundwater irrigation,” points out N. Kumar, former Vice-Chancellor of the Tamil Nadu Agricultural University, while responding to a query whether this has at least led to indiscriminate extraction of groundwater, if not mining.

“Take the case of coconut. Tamil Nadu’s productivity is far ahead of not only the all-India average, but also that of Kerala. This has become possible because of groundwater availability,” observes the academician. During 2019-20, the productivity of Tamil Nadu, as measured in terms of nuts per hectare, was 12,280, whereas the all-India average was 9,345 and Kerala 9,175, according to the data available on the website of the Coconut Development Board, a body falling under the Union Ministry of Agriculture and Farmers’ Welfare.

P.R. Pandian, a Mannargudi-based leader of agriculturists and a known proponent of groundwater irrigation and the free power supply scheme, says that even in the Cauvery delta, one-fourth of the areas is dependent on groundwater. He suggests that instead of 24-hour power supply, the authorities decide the duration of supply, subject to the requirements of farmers in a given area.

There are advocates for the scheme even among former administrators who had handled the subject of agriculture or had served in the State’s western districts, a region known for having a large number of farm pumpsets. C.P. Singh, former Coimbatore Collector, says the district has become the country’s prime production centre of pumpsets, and this would not have happened had there been no proactive policy of the State government in support of energisation of farm pumpsets.

Emphasising that the free power supply scheme should not be disturbed, as otherwise, food security would be affected, G. Santhanam, who belongs to Villupuram district and is also a former Collector of Coimbatore, says the availability of energised pumpsets enables farmers to raise paddy during summer, because the season is beneficial to farmers as they would not have to face the problem of pests. At the same time, he agrees that farmers need to be sensitised about the need for raising less water-intensive crops during March to May.

R. Kannan, who had served as Erode Collector and later, as Agriculture Commissioner and Secretary, calls for the formulation of a well-defined set of regulations for groundwater development and extraction, and says this should be enforced properly. Technology should be tapped for groundwater recharge, he adds.

There are voices even among the farming community that are calling for restrained utilisation of electricity and water. K.V. Elankeeran, a farmer-leader who hails from Kattumannarkoil of Cuddalore district, says that in his area, groundwater could be spotted only at a depth of 600 ft, as against 200 ft earlier. “We have the responsibility of leaving behind, for future generations, an earth that is a better place to live in than what we had inherited,” he feels.

Despite certain disturbing trends with regard to groundwater extraction, the State seems to be making considerable progress in the area of replenishment. A comparative analysis of groundwater resources in 2017 and 2020, as carried out by a team of experts drawn from the Central and State governments, reveals that the number of over-exploited assessment units has gone down from 465 to 435, and critical units from 79 to 63.

For reasons of food security and livelihood, the free power supply scheme can continue, but the authorities, according to an agricultural expert, should insist that the provision of connections be linked to the adoption of micro-irrigation (drip or sprinkler). The government could even improve upon its scheme of subsidy for micro-irrigation to attract more takers. 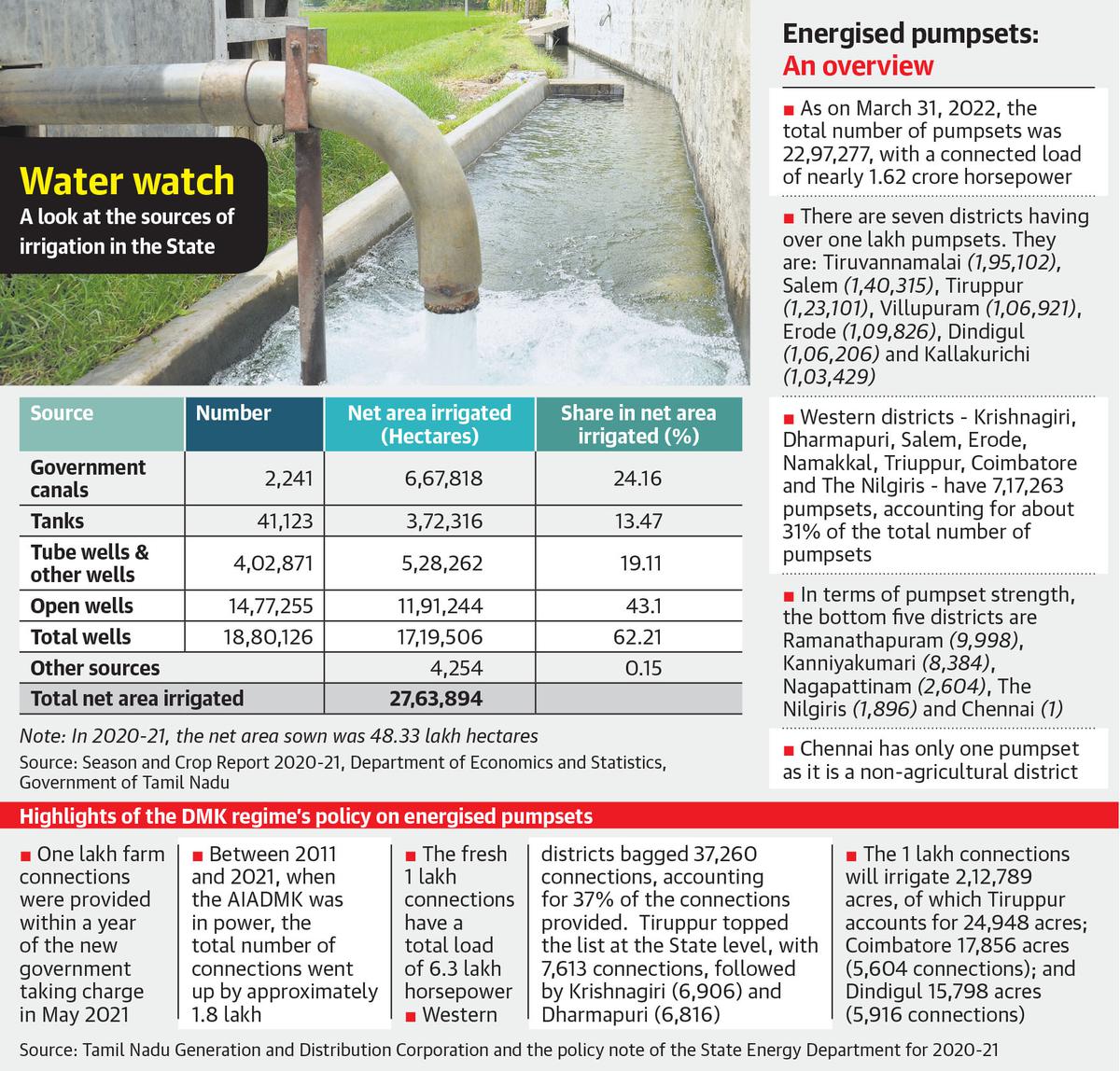