As the same areas go through the nightmare, interventions unlikely to be completed before end of season

As the same areas go through the nightmare, interventions unlikely to be completed before end of season

The monsoon is here and with every bout of rain that lashes the city, parts of the city are under water. What is leaving citizens fuming is that the same spots are re-living the nightmare, for years now, making them question why the authorities concerned cannot find a permanent solution.

For instance, the bustling market hub of B.V.K. Iyengar Road is inundated with every rain, with water gushing into shops causing large-scale financial losses, and also posing threat to life in a high-density area.

Cloth merchant Rahul from the area said heavy rains lead to 3-5 feet of water in the shops, leading to huge losses. “The drains in the area are mostly choked and overburdened, leading to a reverse flow of water. So water doesn’t drain out easily and stays on the roads and in the shops,” he explained.

The worst-affected are the old Tharagupet and Sultanpet areas, traders say. Another wholesale merchant and trade activist from the area Sajjan Raj Mehta said following repeated complaints to the civic body and the Chief Minister, the government has now released ₹4 crore for the overall development of B.V.K. Iyengar Road. However, work is yet to begin. 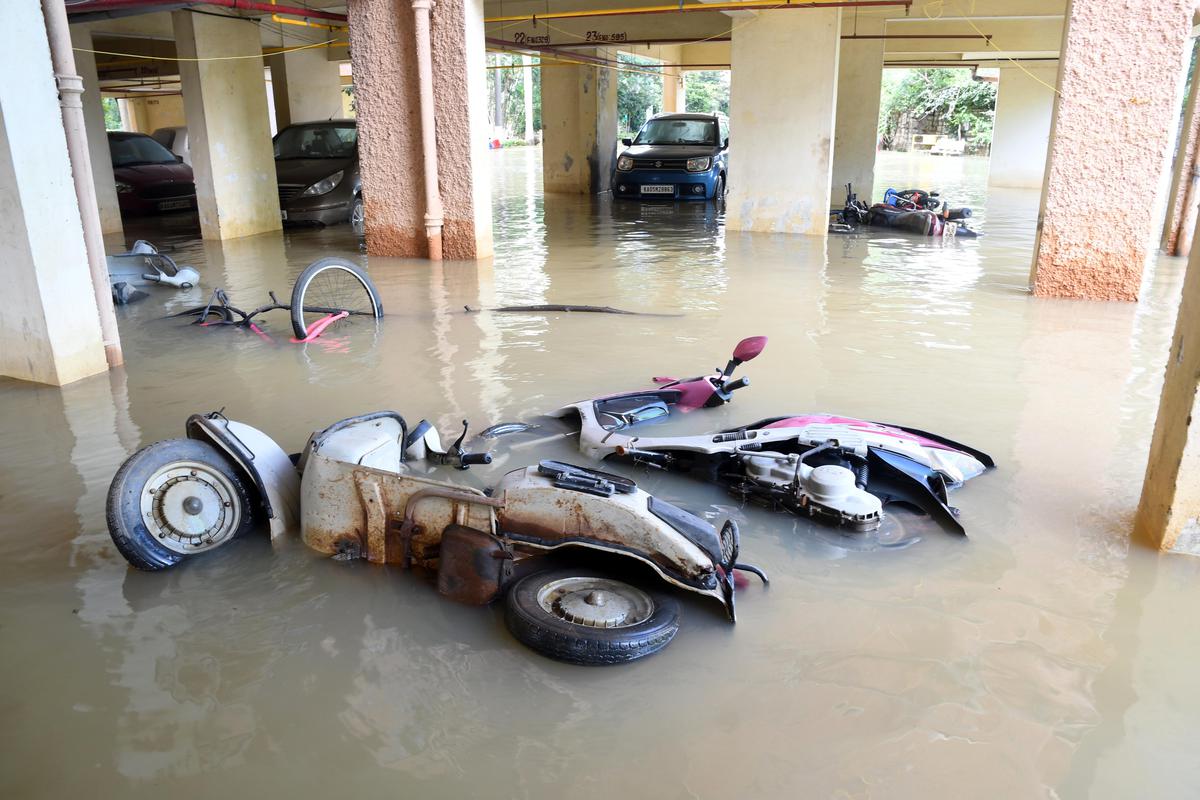 The effect of the rains at Kendriya Vihar apartment at Yelahanka.
| Photo Credit: SUDHAKARA JAIN

On Monday night, vehicles were wading through mini pools that had formed on New Thippasandra Main Road, which is a crucial link to go to various areas such as C.V. Raman Nagar and Vigyannagar. Most inner roads were also waterlogged.

“The worse thing is, even Suranjandas Road gets inundated with every rain, and there is a huge pool that forms in front of BEML gate. It is the same story every year and I don’t know how much longer we have to put up with this,” said Meenakshi, a resident of Malleshpalya.

Residents of Sri Sai Layout in Horamavu ward, who suffered under seven feet water for three days following the heavy rain mid-May, are still waiting for a permanent solution to their problem.

Chief Minister Basavaraj Bommai, who visited the area following the floods, cleared a project to widen a railway underpass and widen a drain to prevent flooding, but work is yet to begin.

Bernard, a resident of the area, said many residents have left the area, renting houses in other areas because there has been no solution to flooding for years now. “Water floods houses and doesn’t recede for days, not only causing huge losses, but also increasing the risk of infections,” he said.

Prakash, a tailor in the area, said his shop was flooded in the recent rain ruining all the clothes causing losses and drawing the ire of customers.

The Bengaluru City Traffic Police (BCTP) and the Bruhat Bengaluru Mahanagara Palike (BBMP) have now identified a total of 59 spots that see waterlogging during the rains and are now working to drain out water from these spots faster.

“We have decided to install vertical box sections at these points to drain out excess water on the roads. The tenders for the same are being finalised and we have set one month’s deadline for the work to be completed,” said B.S. Prahlad, Chief Engineer, Road Infrastructure, BBMP.

These vertical box drains will help drain out excess water from the roads. This means these drains will be complete only by mid-July, well into the monsoon season.

However, the list of 59 spots identified by BCTP is not exhaustive, residents complain. For instance, neither New Thippasandra Main Road nor B.V.K. Iyengar Road that witness inundation figure in the list where intervention is now planned.

“We do not understand why the civic agencies have not been able to prepare an exhaustive list and make effective interventions when the same streets are waterlogged every rainy season. Moreover, heavy rainfall in a shorter time window events have increased in frequency and our roads are not designed for that. There is a need to redesign our roads to make them climate change resilient,” said N. S. Mukunda, of Bengaluru Praja Vedike.

(With inputs from Samhitha B.S and Archita Lakhotia)