In Haryana, political parties slug it out over ‘corruption’- Mrit News

After its success in Punjab, AAP is stepping up efforts to challenge BJP in Haryana

After its success in Punjab, AAP is stepping up efforts to challenge BJP in Haryana

With the issue of corruption taking centre stage, the Aam Aadmi Party (AAP), the Congress and the ruling BJP slugged it out at political rallies in Haryana on Sunday to set the election pitch ahead of polls to civic bodies slated for June 19.

Buoyed with its win in the Punjab Assembly elections, the AAP has been stepping up efforts to pose a challenge to the ruling BJP in Haryana. Delhi Chief Minister and party convener Arvind Kejriwal addressed a rally, Ab Badlega Haryana (Haryana will now change), in Kurukshetra, where he hit out at the BJP-JJP government, accusing it of patronising corruption.

As the AAP aims to establish its footprints in Haryana, the recent induction of Ashok Tanwar, a Dalit and former State Congress president, into the party is being seen as an attempt to woo Dalit voters who constitute close to 20% of the State’s population. By deciding to install pictures of Dr. B. R. Ambedkar along with Shaheed-e-Azam Bhagat Singh in all government offices, where the party is in power, the AAP has given a message surrounding its Dalit politics. The AAP hardly has a structured State unit in Haryana, while Mr. Tanwar, after quitting the Congress and later joining the Trinamool Congress, was almost subdued. Now, both the AAP and Mr. Tanwar are hoping to gain from each other.

Chief Minister Manohar Lal, who addressed the ‘Pragati Rally’ (Progress Rally) in Sirsa, listed the government’s accomplishments, asserting that it was firmly acting against corruption. In Fatehabad, Leader of the Opposition in the Haryana Assembly Bhupinder Singh Hooda (Congress), who has firmed his grip over the party’s State unit following the appointment of his loyalist Uday Bhan as its president, launched a scathing attack on the BJP-JJP government.

Mr. Kejriwal alleged that corruption was rampant under the regime of the BJP-JJP government in Haryana. “I was told that in the past few years several job entrance examination papers have been leaked in Haryana… If a person is not capable of conducting an examination, how will he run the State?” said Mr. Kejriwal, in a direct attack on the Chief Minister.

Claiming that the AAP has zero tolerance towards corruption, Mr. Kejriwal said recently in the AAP-ruled Punjab, Health Minister Vijay Singla was sacked from the Cabinet over allegations of corruption. This, he claimed, no other party than the AAP could have done.

“In Punjab, we removed one of the Ministers and sent him to jail, though neither the media nor the Opposition knew about the Minister’s corruption. It is for the first time that a political party is taking action against corruption of its own people. We don’t tolerate dishonesty. Have any of the other political parties taken action against corrupt people. We have eradicated corruption in Delhi, in Punjab and now we will eradicate it in Haryana as well. I appeal to you to show your power in the coming local body elections. Give us [the AAP] a chance, we will eradicate corruption,” he said. 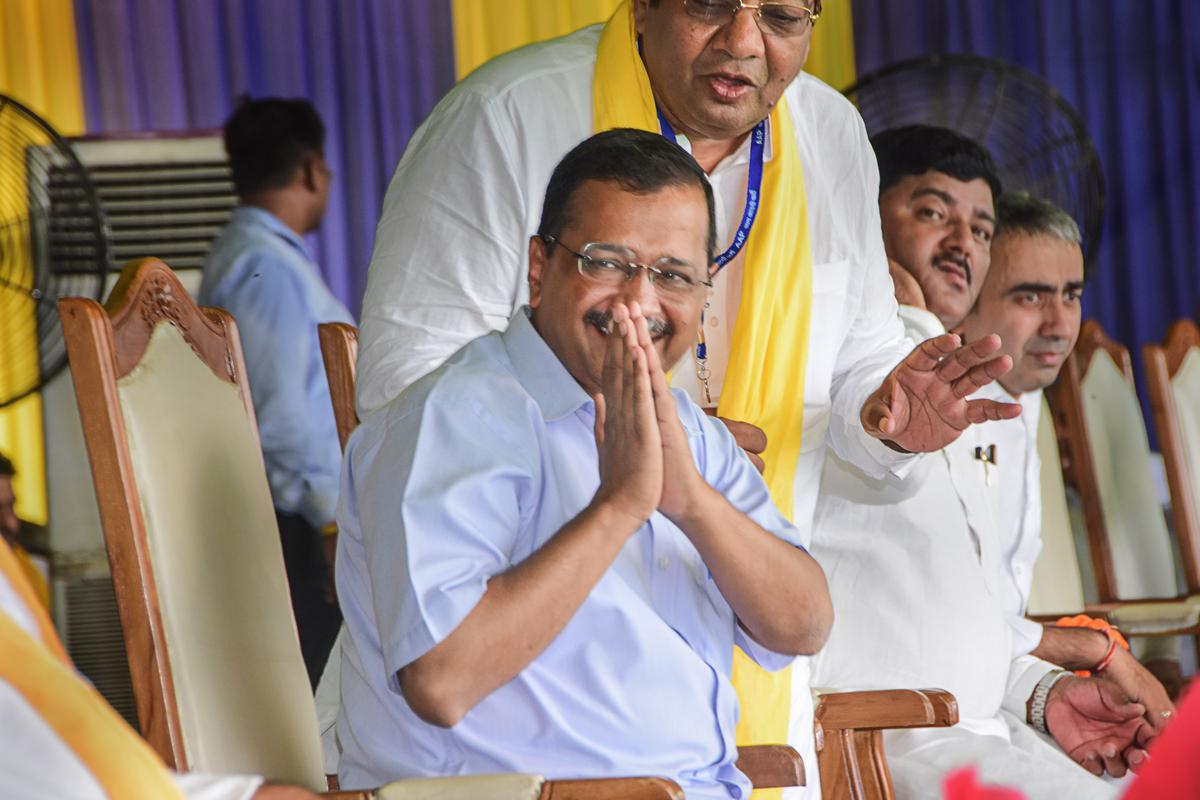 In Sirsa’s Odhan village, Mr. Lal asserted that in Haryana corruption would not be tolerated at any cost. “Corruption had been going on since long. No one dared to stop it, but since we came to power no one involved in corrupt practices is being spared and the strictest action is being taken against the corrupt. As many as 800 accused involved in the paper leak scam have been put behind bars and the search for 300 is still on. The deserving youth are getting jobs on a merit basis. Today, if anyone gives information about corruption, immediate action is taken,” Mr. Lal said.

At the Vipaksh Aap Ke Samaksh (Opposition before you) outreach programme in Fatehabad, Mr. Hooda said scams in Haryana had become a routine affair under the BJP-JJP government. “The list of scams surrounding liquor, registry, paddy purchase, illegal mining in Yamuna and Dadam, medicine, electricity meters, recruitment and paper leaks keeps getting longer every day. Despite so many scams, not a single big fish has been caught till date. It is clear from this that the government is protecting the corrupt,” Mr. Hooda said.

Asserting that the Congress was all set to return to power after the 2024 Assembly polls, Mr. Hooda said once the party formed the government it would start old-age pension of ₹6,000 per month. Also, the party would make Minimum Support Price (MSP) mandatory for crops and the land of farmers would not be auctioned if they defaulted on loans.