With Tamil Nadu being home to over 40,000 temples, many of them ancient ones, in addition to a large number of devotees and tourists thronging them, the State has also witnessed smugglers of antiquities targeting the numerous idols that adorn places of worship. Many stolen idols have made their way into the network of international antiquities dealers as well as museums in foreign countries. Retrieving them is an ongoing process that continues to be a challenge, despite its numerous successes.

While initially, the police pursued cases of stolen idols in addition to other crimes, after the murder of at least six temple watchmen in the late 1970s and the theft of artefacts, a separate wing was set up in 1980 by then Deputy Inspector General of Police K.K. Rajasekaran Nair to go after smugglers of antique goods. Subsequently, a separate squad headed by a Superintendent of Police to deal with idol theft cases was formed under the Crime Branch-CID in 1983. In 1985, the Idol Wing of the Tamil Nadu police was tasked with investigating cases of theft and smuggling of idols that were over a century old and had a market value upwards of ₹5 lakh.

The arrest of New York-based international antiquities dealer Subash Chandra Kapoor by Interpol in 2011, and his subsequent extradition to India and imprisonment in Tamil Nadu as an under-trial, thrust the Idol Wing into the limelight.

The Idol Wing made the headlines in 2016 under the tenure of then Inspector General of Police A.G. Ponn Manickavel, who went after idol smugglers in a big way. One of his biggest catches was the unearthing of about 800 antique stone idols and artefacts from the godown and gallery of antiquities dealer G. Deenadayalan in Chennai. Subsequently, 200 artefacts — most of them made of wood — were seized from the bungalow-cum-gallery of Lakshminarayanan, an associate of Deenadayalan, near Karanai village on the East Coast Road on the outskirts of Chennai. He followed it up with the recovery of 244 antique idols and artefacts from businessman Ranvir Shah’s house in Chennai and two farmhouses in Kancheepuram district, and also unearthed 23 idols on the Poes Garden premises of entrepreneur Kiran Rao.

This was followed by an investigation trail, supervised by Additional Director General of Police Abhay Kumar Singh, and the retrieval of idols from countries such as the U.S., the U.K. and Australia. “The unit (Idol Wing) has recovered 1,463 artefacts, including 878 stolen idols, since 2012 and prevented the smuggling of several hundreds of idols abroad. The value of our seizures from within and outside the country every year is approximately ₹1,000 crore,” said K. Jayanth Murali, Director General of Police, Idol Wing CID.

One of the challenges faced by the agency is conclusively establishing the origins of the smuggled idols and ensuring their repatriation. Recently, the agency retrieved 10 antique idols from the U.S. and Australia after gathering sufficient documentary and photographic evidence about their Tamil Nadu origin. The evidence was sent to Australia and the U.S. through Letters Rogatary (LR) and Mutual Legal Assistance Treaty (MLAT) in criminal matters to bring them back.

The Idol Wing also identifies stolen idols that were smuggled and sold abroad, and arranges their return to their owners. Efforts are under way to bring back 16 idols from the Asian Civilization Museum, Singapore; six idols from Australia; and nine idols from the U.S. 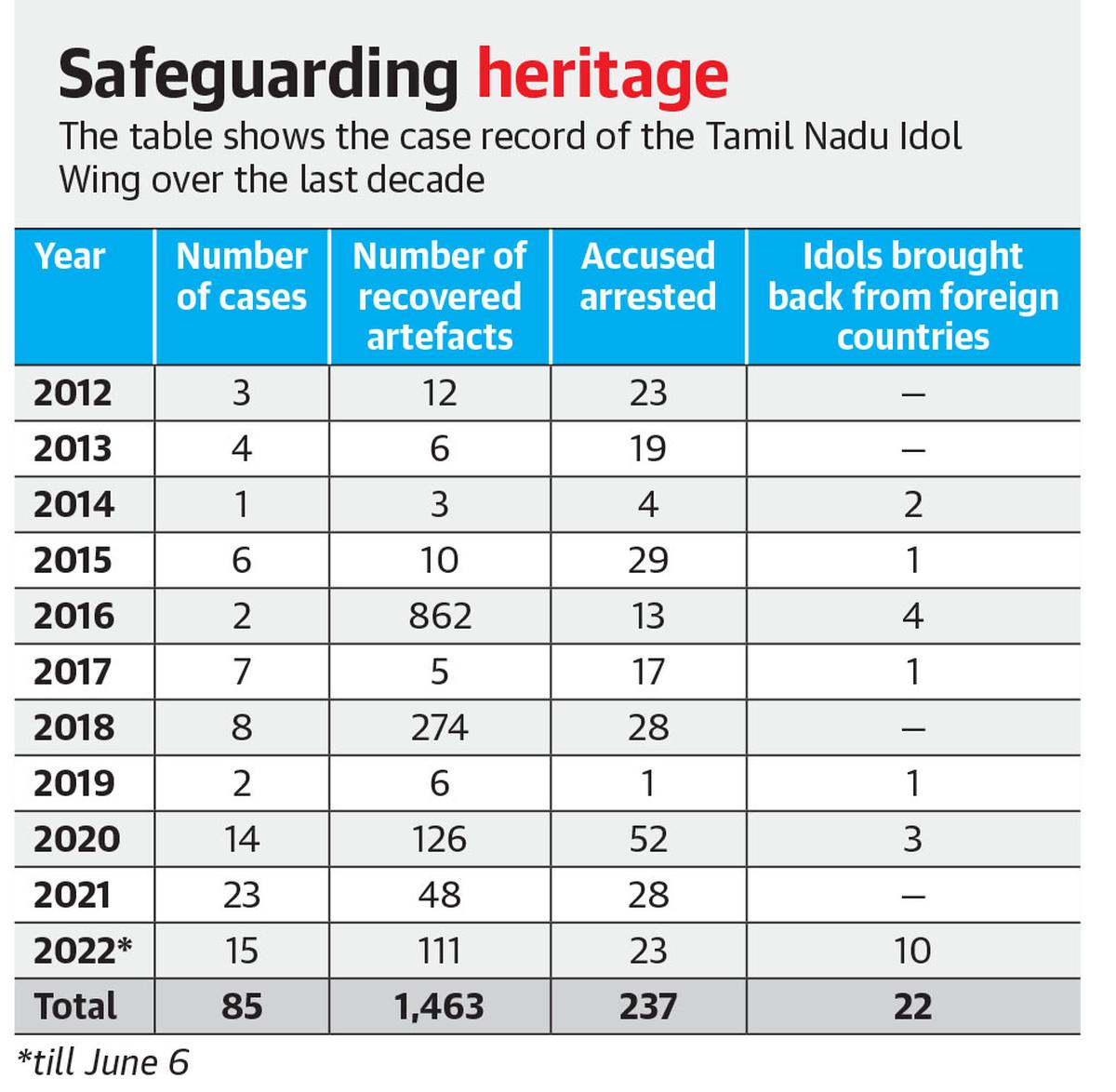 “In the last few years, innovative technologies in art and heritage conservation and research have emerged. Digital imaging, videography and 3D scanning have made it easier to document and record art and cultural heritage,” Mr. Murali said. “The Idol Wing has created a virtual museum, and is attempting to turn the virtual museum into a metaverse, which will allow visitors to interact with the idols in 3D,” he added.

Mr. Murali credits the personnel of the Idol Wing for the success in retrieving idols from abroad. “We are making intense efforts to identify and retrieve more idols in the future,” he added.

Cultural enthusiasts like S. Vijaya Kumar, founder of India Pride, R. Venkataraman and Rangarajan Narasimhan have also been instrumental in opening cases of idol thefts and recovery of antique idols from foreign soil.

“The Idol Wing should not stop with seizures, but should take steps to identify the temples from where those idols were stolen [and restore them] and trace the culprits,” Mr. Venkataraman said.