Eight candidates are in the fray but the fight is mainly among the three key fronts being represented by Uma Thomas, Jo Joseph, and A. N. Radhakrishnan

Eight candidates are in the fray but the fight is mainly among the three key fronts being represented by Uma Thomas, Jo Joseph, and A. N. Radhakrishnan

As rain stayed away, long queues of voters were formed in front of most of the polling booths as 8% of the electorate cast their votes in the initial hour itself in the by-election to Thrikkakara Assembly constituency on May 31.

The byelection was necessitated following the death of senior Congress leader P. T. Thomas, who represented Thrikkakara twice, on December 22, 2021.

Among the three candidates, UDF candidate Uma Thomas, wife of the late Congress legislator P.T. Thomas, was the first to cast her vote at a booth at Palarivattom Pipeline near her house around 7.10 a.m. She had come to the booth after offering prayers at the nearby temple and church.

Emerging from the booth, Ms. Thomas expressed confidence in posting an impressive victory. “PT’s soul is with me so as the blessings and prayers of the people of Thrikkakara. Everything seems to be favourable, including nature. I want to finish the development works in the constituency as PT’s successor,” she said.

The LDF candidate Jo Joseph and his wife Daya Pascal cast their votes at booth number 140 at the Government LP School Padamugal. They had to wait in the queue for about 30 minutes on account of the long queue before casting the votes shortly after 7.30 a.m.

“I am 100% confident about the victory. The confidence was there from the very first day of campaigning and it kept rising since then. Reports are coming in that long queues of voters are in all booths from the morning itself. The sky is clear so as my heart. LDF has put in disciplined work and there is no doubt of a big win,” said Dr. Joseph who earlier in the morning predicted an upset victory recalling the recent UDF defeats in their strongholds of Vattoyoorkkavu and Konni.

Ms. Pascal, who was also in the news after coming out in the open against the fake video targeting her husband during the campaign trail, expressed confidence that the people of Thrikkakara would vote for ‘positive politics.’

NDA candidate A.N. Radhakrishan has no vote as he is a voter in the neighbouring Ernakulam Assembly constituency. “There are strong (political) undercurrents. There is no doubt about an upset victory. I will be the successor of O. Rajagopal in the Kerala Assembly,” he said,

He indirectly recalled the recent controversial Popular Front of India rally in Alapuzha and said that there was a climate of fear in the wake of the alleged open threat against some communities.

He said that the former legislator P.C. George is being crucified by Chief Minister Pinarayi Vijayan and opposition leader V.D. Satheeshan who are with extremists.

Coming out of a booth at Panampilly Nagar with his wife after casting his vote, Ernakulam MP Hibi Eden said Ms. Thomas will drive home one of the biggest majorities. “The verdict of this by-election will be a fitting reply to the arrogance and hubris of the State government. The acceptance for our candidate exceeded all our expectations and indicated an emotional connect the people of the constituency had with PT,” said Mr. Eden who predicted the UDF lead to surpass even the 30,000-odd votes he had bagged during the Parliament elections. 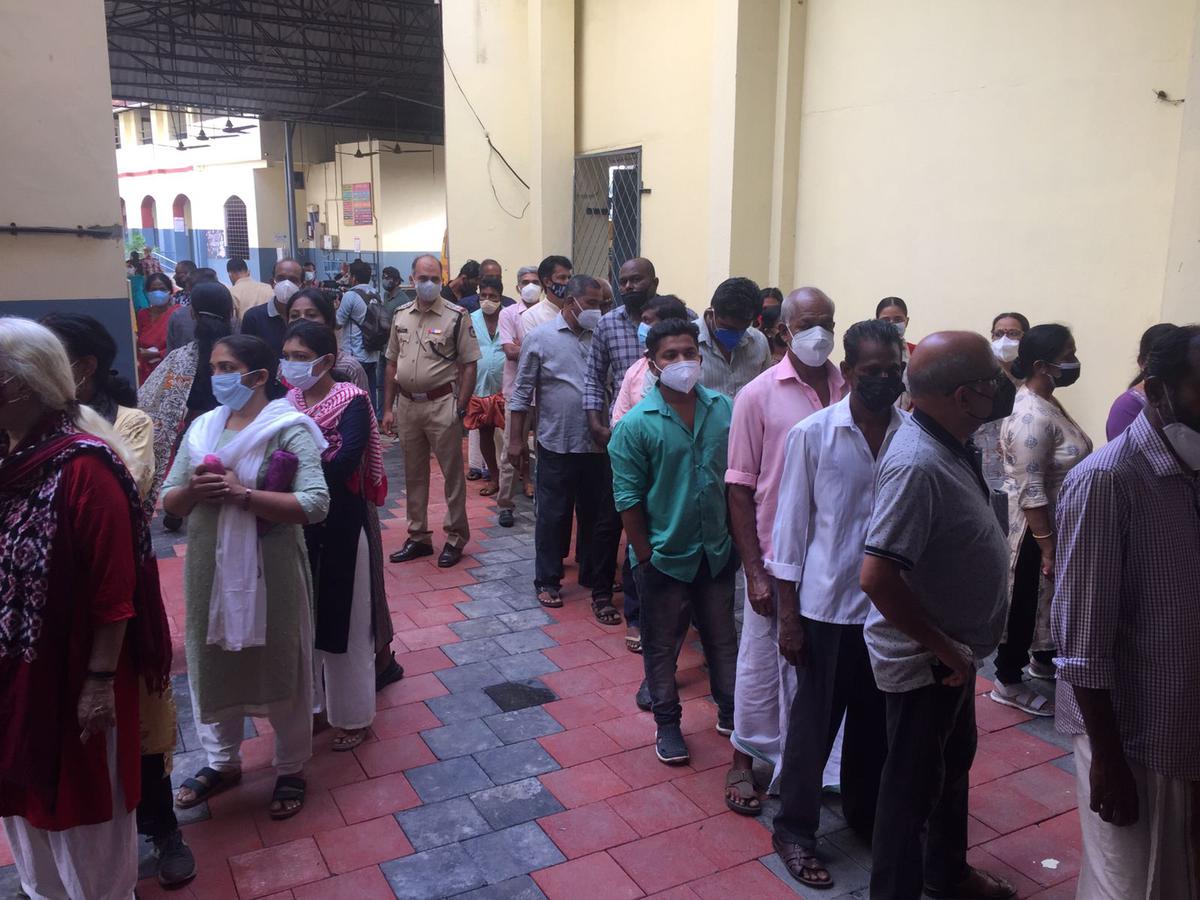 People waiting in queue to cast their vote during the Thrikkakara bypoll at St. George UP School, Chambakkara.
| Photo Credit: Thulasi Kakkat

Snags to Electronic Voting Machines were reported at booths 95, 105 and 119. Voting has been extended by 45 minutes in booth number 119, which is an all-women booth, since that much time was lost in addressing the snag and resuming voting.

Polling is being held in 239 booths in the urban constituency. The total number of voters is 1, 96, 805. About 1, 01, 530 voters are women while the number of male voters is 95, 274. The constituency has one voter representing the transgender community. Over 3, 600 voters are exercising their franchise for the first time. The polling will end by 6 p.m.

About 1,000 Police personnel are on duty to ensure a peaceful election. There are no vulnerable or critical polling booths. Though the Indian Meteorological Department has predicted showers in Ernakulam, the campaign managers are confident that the polling percentage would go up compared to the previous elections.

The average polling percentage in Thrikkakara was around 73% in the three elections held since 2011, when the constituency came into existence. The highest turnout in the urban constituency was recorded in 2016 (74.71%). In the election held in 2021, the turnout was 70.39%.

The byelection had gained unprecedented public and media attention as it turned into a prestige battle between Chief Minister Pinarayi Vijayan and V. D. Satheesan, Opposition Leader. It was the first byelection in the second term of the Left government as Mr. Pinarayi Vijayan himself took up the mantle of leading the campaign from the front. For Mr. Satheesan, the battle turned crucial as it was the maiden major electoral test after the leadership combo of K. Sudhakaran-V. D. Satheesan in the State unit of the Congress party assumed office.